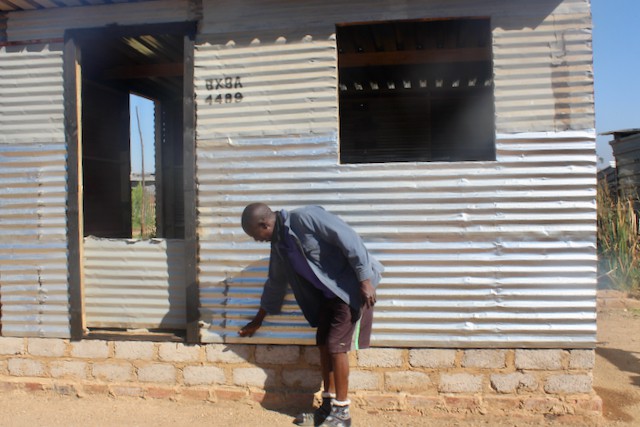 Douglas Fambe from Riverside informal settlement in Mamelodi East is living at his neighbour’s shack after his home was flooded yet again. His shack was also damaged in the Tshwane flash floods of December 2019, which affected 1,500 people, destroyed 74 homes, and flooded 240 others.

Established in 2017, the informal settlement of nearly 2,000 people (according to the City) is located as its name suggests close to the Moretele River. During heavy rains, residents often find themselves with flooded homes as the settlement is built along a flood plain. Rising groundwater also floods shacks periodically.

“I’d sometimes see water springing from underneath. My shack was rusted. I had to build a higher foundation so that it would withstand the damage from the water,” said Fambe.

Fambe and people living along the riverbanks are demanding that the City honour a promise they say it made to relocate them.

“Municipal workers came in December [2020] and marked our homes with numbers in yellow and came back again in February [2021] to finish the rest of the shacks,” said Fambe. “The numbers showed that we had been recognised and would soon be moved. They promised to do so by March this year.”

Riverside residents have dug pit latrines. Some have illegal water and electricity connections. There is no refuse collection. Some homes are lucky enough to be on higher ground.

“The toilets get full very quickly. When it rains, they overflow and fill the streets. That’s not healthy,” said Fambe.

Fambe, originally from Limpopo, moved to Riverside with his wife and daughter after he could no longer afford to pay his rent in Extension 6. He used to be employed as a security officer, but he is currently unemployed and relies on piecemeal jobs.

His neighbour, Gainy Modishane, moved to Riverside in 2017 as she also could not afford to pay rent. At the time of the flash floods, she sought help from a relative in Extension 8.

“My child was only three months old, so I moved in with a relative … It’s election season. If they don’t move us now, then it won’t happen. The summer rains are approaching and we don’t want to experience flooding,” she said.

Nkele Kgwatlha said, “We were hoping to be moved in 2019. We couldn’t go home for the December holidays because we feared people would be relocated while we were gone. We know this is a danger zone but renting was too much [for me] with my four children as well.”

According to Tshwane metro spokesperson Lindela Mashigo, Riverside residents will be relocated “subject to finalisation of the acquisition of land”.

He said recently the City acquired land in Mooiplaats and is currently in negotiations for land for the proposed Pienaarspoort township. It is a bit far from the current location of the beneficiaries in the informal settlements and the land is without bulk service infrastructure. But it is close to existing townships in Mamelodi and Pienaarspoort.

“This allows these households to utilise the existing social amenities nearby while the new townships are developed incrementally,” said Mashigo. The acquisition of further land is required to resolve access issues and the construction of K54 route from Mamelodi to the N4 will bring the proposed township in reach.

As to when they can expect to be moved Sello Chipu, Acting head of Tshwane Human Settlements Department, said that they had hoped to relocate residents by July this year, but there was a delay because the City could not reach agreement on the price of the land to which the residents were to be relocated. He said that by the end of November everything will be “finalised” and the City will make an announcement then.

Chipu said that at first people will be provided with stands without formal services but there would be temporary “rudimentary” services.

Next:  The Information Regulator: Our new transparency superhero?