Paul Gerber, 50, who is paraplegic due to a spinal injury, and his two children, aged nine and 15, are facing eviction. They are unable to pay rent. They live in an illegally built wooden house in Kalbaskraal in Malmesbury. Electricity and water has been cut to the home by the landlord.

The landlord, Andre Combrinck, said he has been advised by his attorney not to comment on anything to the media concerning Gerber’s case.

On Mandela Day, Gerber started a hunger strike, publicised on Facebook. “I might get enough people to send a few emails to the presidency or the municipality to force them to at least give [us] emergency housing,” said Gerber.

Gerber emailed GroundUp a report from Swartland Hospital that lists a number of chronic conditions. Gerber says his doctor advised him that if he goes on with the hunger strike, the chances of him dying are high.

Gerber says he suffered a spinal injury when he and his two employees were attacked and robbed by five men in 2012. Gerber says he was beaten until he lost consciousness. Subsequent to the injury he has lost his business, his house and almost everything he owned.

In August 2015, he and his family ended up renting a three-bedroom wooden house in Kalbaskraal for R6,000 monthly. He had received R50,000 disability cover from his bank. His wife no longer lives with him but visits. Gerber and his children receive R2,510 a month in social grants. They can no longer afford to pay R6,000 rent.

On 29 February 2016 a letter arrived from the Swartland Municipality, addressed to the owner of the property, saying the house was an illegal structure with no approved building plan from council. It was to be demolished by 23 March 2016.

After over two years of battling in the Malmesbury Magistrate Court with the assistance of Legal Aid, Gerber lost and was given until 19 August (60 days) to vacate the property.

The Swartland Municipality says it is attempting to assist Gerber. Hillary Balie, community development manager at the municipality, said it had communicated with Gerber and indicated that he may be housed in a future development in Kalbaskraal. The municipality is also trying to secure funding to provide subsidised housing for Gerber in a Riebeek West project.

However Balie emphasised that according to a Supreme Court of Appeal ruling, “we are of the opinion that we are not obliged to provide for Mr Gerber’s immediate need in this regard”. 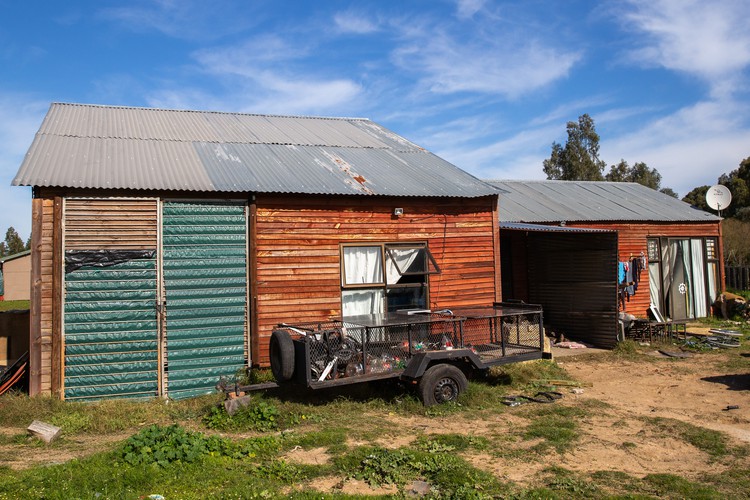 Swartland Municipality says the wooden house where Gerber lives is an illegal structure with no approved building plan from council and should be demolished. Photo: Ashraf Hendricks