People living in their cars face fines of R300 to R500 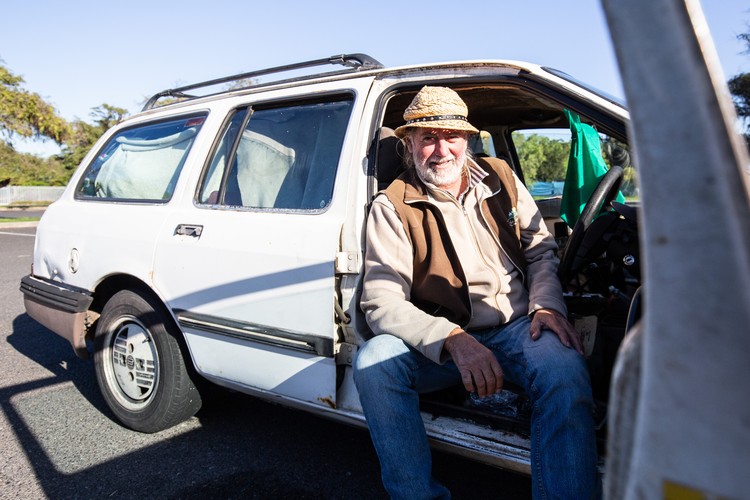 Dane Herrington calls his 1984 Ford Sierra “The Great White”. Purchased in 1989, the car has clocked up hundreds of thousands of kilometres on South Africa’s roads. For ten years, he has lived in his car. Photo: Ashraf Hendricks

When Dane Herrington goes to bed, he moves his belongings, books and clothing to the front of his beloved 1984 Ford Sierra. He sleeps on a large mattress at the back. He uses a shower at a petrol station. For ten years, he has lived in his car.

Since 1989, when he bought the “The Great White” Sierra, the qualified horticulturist, who is now 64, has clocked up hundreds of thousands of kilometres in pursuit of short-term work opportunities in Cape Town, Johannesburg, Pretoria and Waterval.

Unable to secure long-term work, he found himself homeless, with only his car. It was “a slow descent to where I am now”, he says. He doesn’t want to live in a car, he says.

He has his old age grant, a little money from family abroad, and help from people in the community. He says the increase in fuel prices has hit him hard.

For the past few years, he has been living in and around Table View.

Herrington avoids shelters for the homeless. They are too “crammed”, he says.

“It’s not the environment for someone who’s living in his car. I’ve got possessions in there, and they could get stolen … Whether it’s parked on the premises or not, it makes no difference,” he says.

Herrington thinks the City of Cape Town should allow people who have only their cars to live in, to park at abandoned caravan parks or covered parking lots with ablution facilities, for a small fee. “If you’re running your car, you’ve got to have some money,” he says.

But City bylaws make it illegal to live in your vehicle on public property, except in a “dire emergency or in a designated rest area”. Wayne Dyason, spokesperson for City law enforcement, said fines ranged from R300 to R500.

To avoid issues with police or “the ratepayers”, Herrington parks on the grounds of a church in the evening. He leaves around 4am, before people arrive.

He spends most of his day in the library, “my office”. He uses the facilities there to email. He is also working on a book – “Enjoy the Ride”.

How many people are now living in their cars, nobody really knows. Herrington says that there are plenty of people living in cars but “you just don’t see them … They park in certain places where the cops can’t see them.”

He put GroundUp in contact with Beryl, who is 71. She did not want her full name published.

Beryl has lived for the past year with her 37-year-old son in a four-door sedan.

They were each fined R300 for sleeping in the vehicle. “I can’t pay it,” she says. She has a court date in September.

Beryl has her old age grant and occasionally gets work, such as dog sitting. She spends about R450 a month on petrol for the car. “If you don’t drive it every day, the battery goes flat,” she says.

They have a gas stove for cooking and two small solar panels for charging devices. She swims in the sea and showers on the beach if it’s not too cold.

Next:  Sex workers are angry with the Gender Commission. Here’s why

Zoning is the key to addressing homelessness.

I don't understand why the City of Cape Town's Development Management Scheme does not incorporate a zoning category that would allow for trailer and mobile home parks. Residents can rent a plot at the park and then don't have to deal with lawyers and the Deeds Office or pay transfer duty. Plot rental is much less expensive than what you would normally have to pay for a bond. It is also profitable for the landowner, as the land may otherwise be lying dormant while the landowner pays the rates and taxes.

It is the perfect answer to our housing problems in Cape Town. If the tenant wants to move, they can pick up their house and move it somewhere else, or if you are living in your car, you can turn on the ignition and drive to another site. For the poor, mobility is everything - The ability to move house or car to wherever work opportunities exist, just like the humble tortoise is able to take his shelter with him wherever he goes.

Conventional homes are expensive and yet the City is hellbent on building homes for the poor. The poor are quite capable of building their own homes – it is secure land that they need.

The way to address the City's housing backlog and to help people to be able to legally use their car as a home is for the City to be proactive and create a zoning category that would allow for trailer parks and mobile home parks both in the metropole and the rural areas. Then the private sector would automatically step up to the plate to address the need for this kind of accommodation. This would be one way of helping people to get off the streets.

I believe zoning is the key to addressing homelessness.

Give us jobs, chant hundreds of Gauteng workers