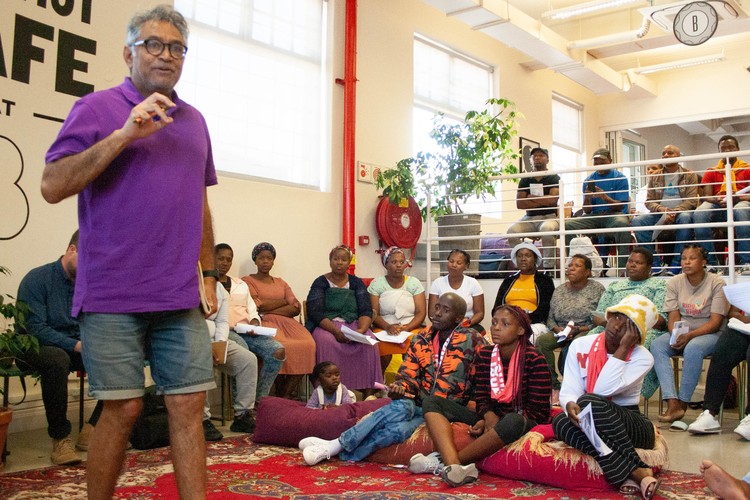 Zackie Achmat of commuter activist group #UniteBehind says good infrastructure, equipment, and security are needed to fix PRASA trains. He was speaking at a discussion at Bertha House on 25 November. Photo: Liezl Human

Overcrowded trains, insufficient security guards, and poor infrastructure. These are just some of the concerns raised by commuters and activist group #UniteBehind during a dialogue at Bertha House in Mowbray, Cape Town on 25 November.

In September, we published graphs showing some of the consequences of the large-scale corruption over more than a decade at the Passenger Rail Agency of South Africa (PRASA). This collapse has had a devastating impact on many people who relied on trains as the cheapest mode of public transport. During the dialogue several people shared their experiences on using Metrorail trains and stations across Cape Town. Commuters particularly complained of the terrible state of stations in the Cape Flats like Nyanga Station.

Commuters say they are spending more money to travel from areas like Khayelitsha, Gugulethu, and Nyanga. Some say they now pay three times the fare to get from Khayelitsha to the city centre. Some safety concerns are that train doors on some Central Line trains don’t work properly, windows are broken, and the fencing is broken.

Zizipho Ndlelana of CSJ said she pays nearly R60 per day to travel from Gugulethu to the city centre by taxi or a bus. She said that trains were a much cheaper option for commuting. Before 2020, most single train tickets were less than R10.

Zackie Achmat of #UniteBehind said that good infrastructure, equipment, and security is needed to get the rail service fully operating again.

Achmat also updated the group on the latest ruling by the Supreme Court of Appeal which dismissed an appeal by a “corrupt” Siyangena Technologies, a contractor of PRASA.

The appeal was against a judgment of the Gauteng High Court in 2020 which found that the R5.5-billion contract was scored through corrupt means. #UniteBehind was admitted as amicus curiae (a friend of the court).

Achmat said that those who were involved in procuring the dodgy tender should now be prosecuted and go to jail. Achmat said that #UniteBehind is working on projects to shed light on state capture, corruption and the dodgy Siyangena deal, but added that the “most important work” is to try and fix the trains in Cape Town.

PRASA did not respond to GroundUp’s request for comment at the time of publication.

Give us electricity or move us, says Mamelodi community