High levels of E. coli detected, but that might not be the worst of it 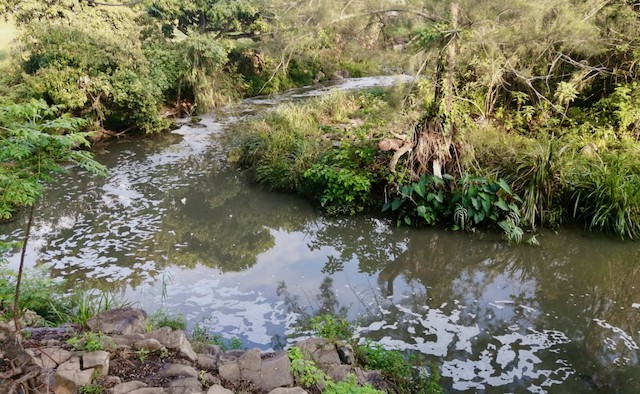 Greenpeace Africa and local organisations are calling for the restoration of the Umbilo River in Durban. Photo: Sandra Streak

Environmental activists of the Umbilo River Community are calling on the eThekwini Municipality to take urgent action to improve the water quality of the Umbilo River. They say recent tests have shown very high amounts of E. coli bacteria, some strains of which can be harmful to people relying on the river. The group is appealing to the community to stay out of the water.

For the past 12 years, residents and environmental groups have been complaining about the foul smell, foamy waters and unusual colour of the river. The area of concern includes a listed natural heritage site of 20 hectares of mangrove forest and coastal grassland within the industrial area of Durban Bay.

The river and its tributaries flow through several communities and informal settlements.

Greenpeace Africa Durban activist Delwyn Pillay said the pollution, which he says has been left unchecked for years, has killed marine life and produced an overwhelming stench. He said residents want the river to be cleaned and those contaminating it held accountable.

Greenpeace gathered 4,500 signatures for its petition about the river. Demands include: monthly water sampling at multiple locations to determine exactly which industries are responsible for the pollution and contamination; comprehensive test for all types of industrial effluents and sewage waste; management reports to be made public; the reviving of the “Blue Scorpions”; and monitor compliance with the water-use licences. Co-ordinator for the South Durban Community Environmental Alliance (SDCEA) Desmond D’sa said most of the polluting industries that feed into the Umbilo River are upstream in New Germany, Pinetown.

He said all eThekwini Municipality sewerage works should have a maintenance plan and a set budget to ensure there is constant maintenance. There should also be monitors placed along strategic points of the river to ensure no illegal dumping takes place.

He said unscrupulous hired tanker operators, who are supposed to ferry the chemicals to a hazardous landfill site or recycling depot, dump chemicals illegally in the river. “We should also have all certificates of how the waste is conveyed to landfills or sewerage works,” said D’sa.

“All the above will resurrect the river … By investing in the river catchment areas we protect everyone,” he said.

Ward 18 councillor Melanie Brauteseth said that the state of the Umbilo River is of great concern. “A solution needs to be found and implemented.” She said the wastewater treatment plant “has not been fully operational due to bad planning and a lack of maintenance”.

“The responsibility for this state of affairs rests at the door of the eThekwini water department. I call on this department to treat this situation as urgent for them to escalate the issues to the national Department of Water and Sanitation,” said Brauteseth.

EThekwini Municipality’s spokesperson Msawakhe Mayisela said the City is aware of the issue and in the process of addressing the matter. “We also noted the high E. coli counts at the Umbilo Treatment Works. The tracing team found a pump station that was overflowing in the Paradise Valley area.” He said this was due to sand in the pumps, but it has since been repaired.

A well placed source told GroundUp that malfunction at the sewage pump station was likely responsible for the high E. coli readings. In high concentrations it could also cause the water to go anaerobic and further downstream cause algae blooms. E. coli is a proxy for pollution from human waste, and it may not be the most dangerous pathogen released into the river, the source explained.

He also said that textile and metal industries in Pinetown have for 30 years discharged excessive pollutants which the Umbilo Wastewater Treatment Works is unable to treat properly. This is the cause of the discolouration, foaming, bad odours and, depending on the type and quantity of chemicals, killing off of flora and fauna.

Thanks to Roving Reporters for assistance with this story.

Next:  “Not everything that came out of this Covid-19 situation was bad”

Covid grant extension is a lifeline for asylum seekers

Abahlali leads hundreds in march against corruption in Durban