Some residents are being housed at a Temporary Relocation Area 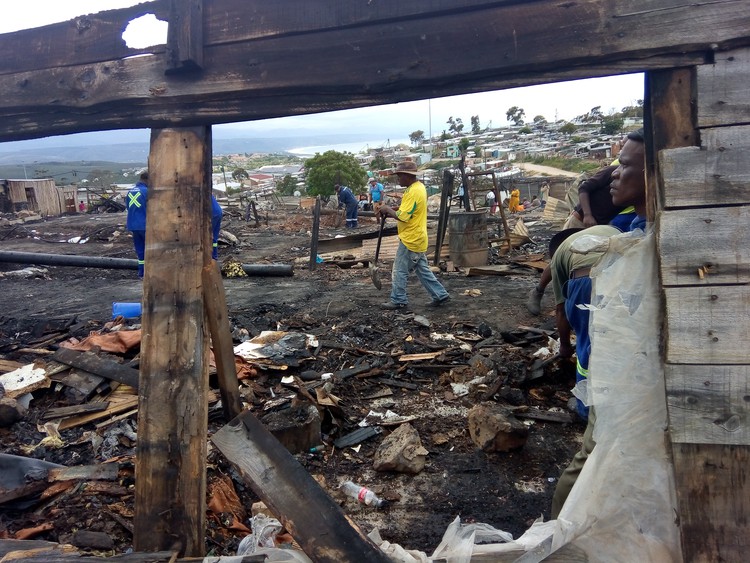 At least 24 homes were gutted, leaving about 33 families homeless when a fire ripped through Qolweni informal settlement in Plettenberg Bay on Monday. Photo: Siphokazi Mnyobe

At least 24 shacks were gutted, leaving about 33 families homeless when a fire ripped through Qolweni informal settlement in Plettenberg Bay on Monday. No injuries were reported.

Resident Xolani Namba said they were woken up just before 3am with a cloud of smoke in his shack. “I jumped up and took my kids to a safe place and came back to help move some of my furniture. Though I lost some of my appliances and furniture, I’m grateful I managed to move my car and kids. Some of my neighbours lost everything in the fire.

“I don’t know where they will get the strength to rebuild or get money from to buy new furniture and Christmas clothes for their kids,” said Namba.

In a statement, the Bitou Municipality said that the cause of the fire was still not clear but it was likely an accident. Material to rebuild some of the shacks was made available later on Monday. The municipality said that some of the families who were unable to rebuild were immediately accommodated at the City’s temporary housing site on Minaars Land to avoid placing families in halls due to Covid-19.

“The families that will be temporarily housed in the TRA will have to be beneficiaries of the Qolweni 169 project,” the City said.

Bitou Executive Mayor Peter Lobese, councillors and other senior officials from various departments visited the families and promised to speak to Home Affairs to assist those who lost identity documents and birth certificates in the fire. Lobese also promised to donate school uniforms.

Community leader Siyabonga Momo said: “Two Months ago fire erupted in the area where four shacks burned down and a young boy lost his life. [Our community is] still recovering from that but at least we are grateful no one died today.”

Momo urged residents to be cautious and asked the municipality to give each shack an electric box to eliminate illegal connections.

Next:  Women march for farm and land rights