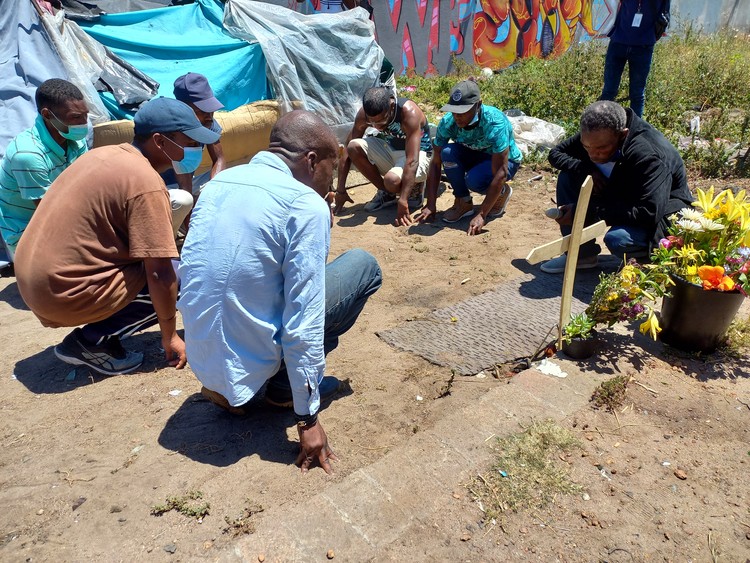 Friends of Dumisani Joxo gathered for a memorial at the site where he was shot dead in Rondebosch, Cape Town, in January. Archive photo: Marecia Damons

The City of Cape Town has confirmed that the law enforcement officer accused of shooting and killing a homeless man is still in its employment.

The case against the officer, Luvolwethu Kati, was yet again postponed in the Wynberg Magistrate’s Court this week.

Kati is accused of shooting Dumisani Joxo on 9 January, apparently after a scuffle broke out over the dousing of a fire. Joxo was shot in the mouth and later died.

The City told GroundUp that Kati remains employed as it “deals with these matters in line with the prescribed labour legislation and relevant City policies”.

Joxo, at the time of his death, was living in a settlement near the Liesbeek River Trail in Rondebosch.

His friends say they are yet to see justice more than six months after Joxo’s death.

Christopher Caesar said he is disappointed that the case is yet to be finalised and the community wants Kati to be held to account for Joxo’s death.

“I really hope this case can just come to an end. The pain we are feeling still hurts,” he said.

Caeser said many in the community looked up to Joxo as a leader and father figure.

“There are times when I don’t even sleep … When I come out of my door, I always look at the spot where he was laying. It still hurts,” said Caesar.

On Wednesday, Kati made a brief appearance in the dock. He faces a charge of murder

Kati was granted bail of R1,000 when he first appeared in court in January. The case was then postponed to April for further investigation.

In April, the state told the court that it was still busy with its investigation. The court then postponed the matter to Wednesday, 15 June.

On Wednesday, the state said its investigation was still incomplete due to an outstanding supplementary pathology report.

Next:  Understanding the Zimbabwean permit case

Lottery boss suspended for the third time for suspected corruption