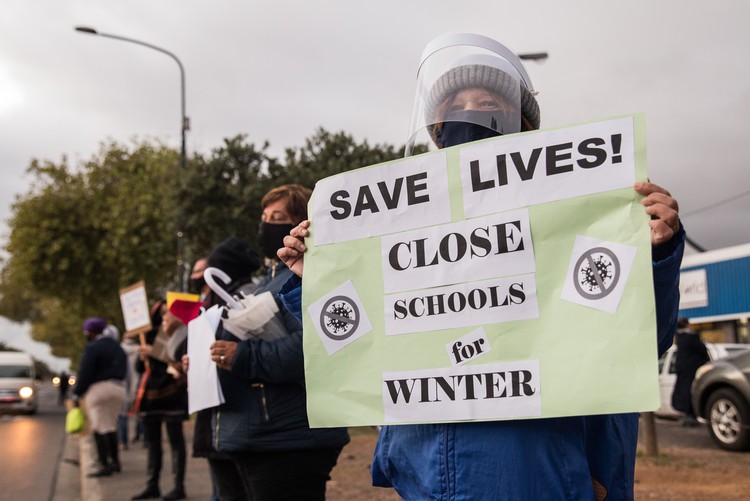 Yolanda Jackson, a teacher at Portia Primary, said that she wants schools to only be fully open once the “peak” is over in the Western Cape. Photo: Ashraf Hendricks

About 80 teachers and parents held a picket before sunrise on Thursday calling for schools to close until the Covid-19 “peak” has passed in the Western Cape. The picket started at 7am in Klipfontein Road near Athlone Stadium. A second demonstration was held in Retreat.

The picket was intended to highlight a letter written by school principals to President Cyril Ramaphosa and his cabinet, calling for the government to reconsider its decision on the opening of schools. Schools opened on 1 June for Grades 7 and 12 learners and the gradual phasing-in of more grades is expected from 6 July.

“The opening of schools is premature,” said Clement Mayor, a history teacher at Athlone High School. He said the Western Cape is only beginning to head into its “peak”. Opening would lead to major health risks for teachers, pupils and the broader community, he said.

Only “when we have reached the peak or when infections have substantially been reduced,” should schools open, he said. Mayor said only in South Africa had schools been opened while infections were rising. Health experts had advised people to avoid mass gatherings, he said, “but what is schooling? Schooling is a gathering of a mass of people”.

Mayor said it was already difficult to monitor protocols such as the wearing of masks and physical distancing, with only grades 7 and 12 present. He said there was uncertainty and anxiety in classrooms.

“I think it’s too early to open schools on 6 July,” said Nawaal Nolan, the department head of the foundation phase (grade R - grade 3 learners) at Morgenson Primary. She said opening before the peak was over was “reckless”. “We’re not saying schools shouldn’t open, we’re just saying that it’s not the right time now,” said Nolan.

Nolan said there had not been any positive cases at her school but some staff had gone into isolation, and the school was using teachers who were not qualified for the grade. “Grade R teachers and grade 1 teachers are in grade 7 classes because that’s all we have at the moment,” she said.

According to the Western Cape Education Department (WCED) Covid protocol, schools can apply for substitute teachers as soon as a teacher falls ill or is in isolation, and this will be considered “if affordable”. Schools are also allowed to use volunteers who have been screened.

Nolan said that the idea of her classes starting is making her anxious. “We can social distance now, but when six extra grades come, I think it’s going to be a huge task for us.” Nolan said she would not send her own grade 1 and 9 children to school. Her eldest son has chronic asthma and she feels that it isn’t safe until the peak is past.

As of 19 June, 375 teachers and 61 learners had tested positive, according to the Ministry of Education.

Provincial Minister of Education Debbie Schäfer said there was no evidence of a greater rate of infections at school than anywhere else and most schools had not reported any Covid-19 cases.

“It is understandable for parents and teachers to be anxious about this – as we are about all of our daily interactions at work, in shops, when visiting healthcare providers and the like,” she said. “But the fact is that this virus is going to be with us for a while – we can’t shut down schooling for a year or more. So we need to be pragmatic and weigh up the risks, implementing every possible measure to keep our learners and staff safe.”

“The vast majority of under 20s who have tested positive, as well as a number of teachers, did so during lockdown, when schools were closed,” she said.

Schäfer said that keeping schools closed would affect the most vulnerable learners, leaving them without access to the schools’ nutritional programmes. Parents needed to be able to go to work and could not leave their children alone at home.

Etienne Jansen, a grade 12 Business Studies teacher at Crystal High School in Hanover Park, said teaching during the pandemic had been “very daunting”. Grade 12 learners were struggling and he never had a full classroom, he said. Learners were concerned that the cold weather could make them more susceptible to sickness. Some learners had asthma but at home they did not have access to data or cellphones to work remotely. “They can’t manage without us as teachers”. Jansen is a diabetic but he is still teaching. “I cannot see them not being educated,” he said.

Jansen said he had found out last night from a parent that one learner had been confirmed positive. But, Jansen said, teachers would still be going in to teach.

Civil Society organisation Equal Education said learners from poorer, more vulnerable backgrounds would be worst affected by the school shutdown because of lack of access to resources. Though teachers had been creative with remote learning, “the use of WhatsApp and Facebook groups to communicate with learners is not feasible for all because of no data or no access to cellphones.”

Previous:  No high school places for thousands of Grade 7s in 2021