Witness claims arrested activists were filming police but not obstructing them 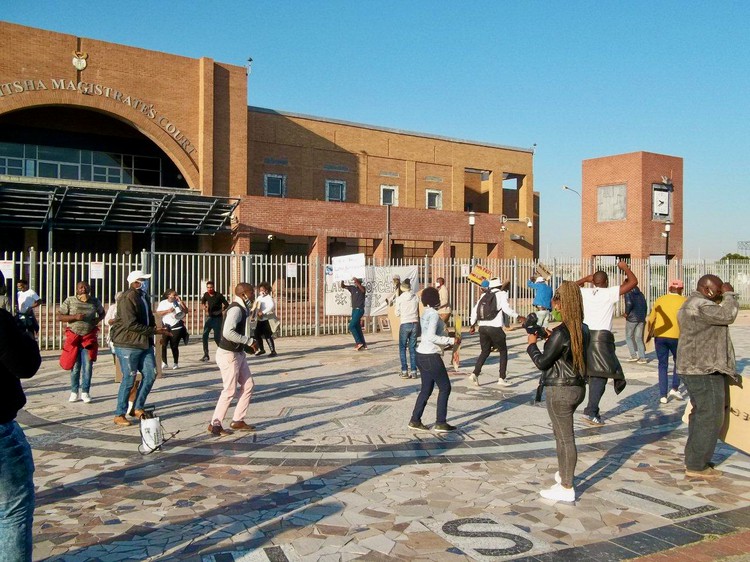 Outside the Khayelitsha Magistrates Court, SJC activists along with evictees from Makhaza, Mfuleni and other areas sang struggle songs and waved placards. Photo: Vincent Lali

In a video posted on Khayelitsha Community Action Network (CAN) Whatsapp group, Notywala says he is charged with public violence, assault and incitement.

Fellow SJC activist Swartbooi has not yet been charged. He appears in the video wearing a bloodied T-shirt.

Khayelitsha CAN activist Bonga Zamisa said land occupiers sat on the road “peacefully” for about an hour to prevent the officials from seizing their shacks. “The residents said they would not allow the officials to leave with their building materials.”

Zamisa said the police fired rubber bullets and stun grenades to disperse them.

“They arrested Axolile, Nkosikhona and Luyanda while they video-taped the residents as they sat on the road,” he said.

Zamisa said, “They were not obstructing them [law enforcement] from executing their duties.”

The land occupiers have been putting up shacks amidst repeated demolitions over the past two weeks.

Notywala and Swartbooi were to appear at the Khayelitsha Magistrates Court on Friday, charged with convening and attending an illegal gathering in April, but the court was being decontaminated.

“They were providing essential services and monitoring human rights violations” when the cops arrested them on 11 April in Empolweni, said CAN spokesperson Sindisa Monakali.

“My arrest is intended to victimise me and scare other residents who may want to occupy land,” said Notywala.

“I never convened the gathering. The Law enforcement’s presence there [Empolweni] caused the residents to gather and safeguard their belongings while the officials were demolishing their shacks,” said Notywala.

He said the shack dwellers called him to the scene and asked him to help them.

Earlier in the day outside the Khayelitsha Magistrates Court, SJC activists along with evictees from Makhaza, Mfuleni and other areas sang struggle songs and waved placards with the faces of Mayco Members JP Smith and Malusi Booi on them.

“We are not only calling for the cessation of evictions but also call for the abolition of the whole [City of Cape Town] law enforcement,” said Notywala.

The activists marched from the court to the City of Cape Town offices nearby.

“Evictions started long before the lockdown regulations came into effect,” said SJC activist Thando Njamela. “Law enforcement has been victimising poor shack dwellers without accounting to anyone for far too long.”

Notywala said, “These stories about evictions of residents from the land shows that the discrimination and victimisation of black people is systematic.”

Wayne Dyason, spokesperson for City Law Enforcement, said that five people were arrested by Law Enforcement and Metro Police on charges of public violence and incitement to violence. (We do not know who the other two people are.)

Next:  Judge Makhubele skips Zondo Commission due to “trauma” after tyre puncture