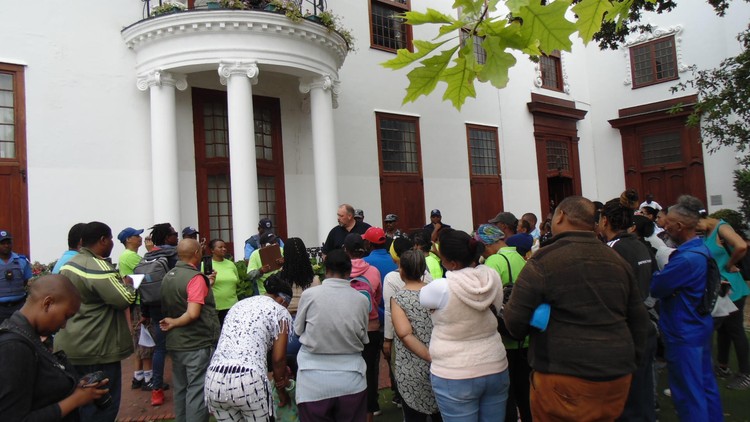 Stellenbosch backyarders say that if their housing demands are not heard they will occupy the Stellenbosch Golf Club.

About 50 members of the Stellenbosch Backyard Dwellers Forum marched to the Stellenbosch town hall on Wednesday demanding progress on housing developments they say were promised to them by the municipality.

They live in shacks in the backyards of homes in Cloetesville, paying rent of between R800 and R2,500 a month to the homeowners. The Forum handed a petition to the municipality, signed by 966 people, demanding that several pieces of land be earmarked for housing for backyarders.

The Forum said that in nearby Kayamandi, the municipality had acquired land and built houses on it for people who had occupied the land. But their own demands had been ignored, they said. “Should we also start invading land illegally before we are listened to?” they said in the petition.

“Should we not receive any feedback within seven days we will definitely disrupt/invade the golf course,” they said.

“We know they will pay attention when we invade the golf course because that is where the rich people go,” said Plaatjies.

“Our people are suffering,” said Christine Steyn, treasurer of the Forum. “We are blocked by the municipality, they are selling our land to outside people and it’s going to stop this year. We’ve been peaceful long enough.”

Steyn says that the security complexes being built around Cloetesville are unaffordable for backyarders.

According to Grobbelaar, the municipality has identified several pieces of land in Cloetesville and has applied for funding for feasibility studies from the Department of Human Settlements.

“Human settlements is a national and provincial competency and mandate,” Grobbelaar says, “Municipalities across the country act merely as implementing agents for housing projects based on funding received from these spheres of government.”

“Stellenbosch Municipality provides as many housing opportunities as possible with the limited resources that we receive.”

Next:  Social development department is biased against adoptions, says judge

Previous:  Tension over electricity between families in shacks and government housing in Kariega