“On Wednesday night for the first time in days, I went to bed with a little bit of hope” 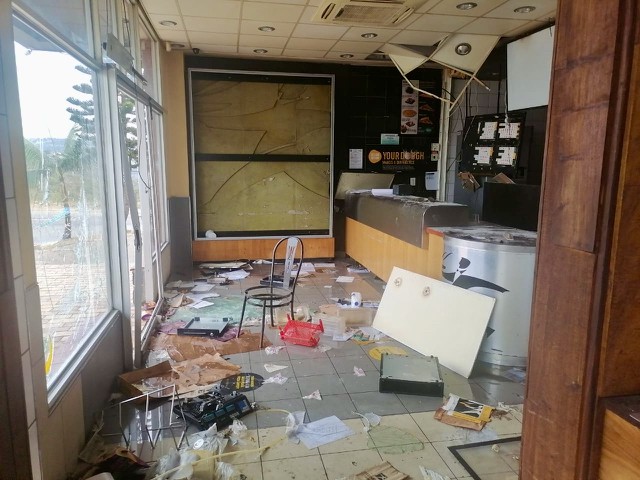 A Debonairs Pizza outlet in the aftermath of the looting of shops in Newlands West, Durban. Photo: Nokulunga Majola

For the first time in days, I went to bed on Wednesday night with a little bit of hope that things would get back to the way they were before the looting began. Communities were banding together to protect what was left. It gave me joy to see people volunteering and organising themselves to help clean up the mess left by the riots in various parts of Durban, including Umlazi Mega City and Central Durban. And I felt relief when I got a call around 7pm Wednesday from a source in Phoenix saying the army had at last arrived.

Phoenix had been turned into a war zone. Gunshots rang out in the darkness as members of the community, police forum, the police and private security personnel tried to prevent looting and stop anyone from entering the area.

For days I have been out in the field in KwaMashu and Newlands, feeling deeply saddened at what has happened to my beloved province of KwaZulu-Natal and the beautiful and warm City of eThekwini.

Some of the looters were not satisfied with just taking whatever was inside; they had to toss a match as well. Why? And at such cost to the community. Let us not forget the lives lost. How are we going to recover from this? I keep asking myself.

Some communities took a stand. I have been reading about how people in Durban North, Phoenix, Redhill, Avoca, Chatswoth, Wentworth and other areas have been supporting and helping each other in this time of need. Some cooked soup and made tea and coffee to be delivered to the men and women who were on the streets day and night patrolling and making sure that their communities were safe.

I am grateful that as I write this, my family members are safe; they have only run out of petrol. Other people are running out of food, basic necessities like sugar and milk, and baby formula and nappies. They are spending hours queueing to buy groceries in places far from their homes because all the supermarkets closest to them have been looted and burnt.

I was lucky; I happened to have enough food at home, but I’m unable to find bread and milk. So, since Tuesday, I have started to make vetkoek.

A friend who lives in central Durban told me that she needed things for her baby. She headed to a supermarket in South Beach, but the queue was too long and she gave up. On her way home she came across someone selling nappies, almost certainly looted. But her baby needs diapers and formula, so she bought them.

A campaign to free former president Jacob Zuma instigated all this. On Friday, people protested as they usually do, by blocking roads with burning tyres and rubble. That is normal. But then on Sunday night, the looting started just 15 minutes from my house at Bridge City Mall, then spread to KwaMashu Shopping Centre and other areas. Since then, malls, shops, businesses, factories and warehouses have been stripped and torched.

At 4 am on Monday I was woken by the sounds of wheelbarrows and trolleys in my street from people who had been out looting that night. They were carrying loads of food and even building materials.

As the day progressed, I saw people from my neighbourhood and vehicles carrying anything from furniture to groceries. I watched in amazement as they walked up and down my street and the main road with their looted items.

Later, when I thought it was safer, I made my way to the mall and saw people still looting, and others waiting for vehicles to collect them without a care in the world. Most people were not wearing masks and paying any attention to the pandemic. I walked around talking to people.

Then I saw a Facebook post from a colleague at KwaMashu Shopping Centre. When I got there, people were looting whatever they could lay their hands on whether they needed it or not. Two funeral parlours were broken into and the coffins were taken; some coffins had been left lying in the street. I stared at them and asked myself, what did the instigators of these protests have in mind? Did they think of coffins?

Previous:  Soup kitchens in Makhanda struggle to keep up as demand doubles

Makhaza might wait another four years for promised police station