Pensioners queue among mass of shoppers to collect social grants

Busy roads, long queues and children playing in the streets. This was the scene in some townships in the Nelson Mandela Bay Municipality on Monday morning despite the call to remain indoors during the national 21-day shutdown to slow the spread of Covid-19.

On Monday, our reporters in Port Elizabeth saw snaking queues outside stores and social grant paypoints as well as the sale of alcohol which has been prohibited during the lockdown.

Meanwhile, thousands of social grant beneficiaries, whose grants were only available from today, were seen among those waiting to enter stores to collect their grants. Some people say they gave up after seeing the long queues.

At the Motherwell Shopping Centre, there were about 1,500 people waiting to get into Shoprite while others queued at ATMs. At the entrance to the shopping complex stood a group of security guards only allowing a certain number of people in at a time. A security guard with a loudhailer told the crowd at the gates that they would be forced to close the mall if shoppers did not stop shoving one another.

The mall has posted messages: “Keep one metre social distance from the next person. Groups larger than 50 people will not be allowed outside this shop. lf you fail to adhere to the above rules, we unfortunately will be forced to close the store.”

One shopper, Mandisa Mkalima, said she was accompanying her 76-year-old mother to collect her monthly social grant. They returned to their home in Wells Estate without getting her money. “I will have to come during the week when there are fewer people. My mother can not endure standing in the queue for several hours. We have been here since 7am but only a few people have been assisted [by lunchtime],” said Mkalima.

A pensioner, who asked not to be named, said he managed to collect his money from an ATM at Boxer Shops. He arrived at the mall at 2am. He said he would be settling his debts and will buy more groceries to last for the lockdown.

“I was accompanied by my grandchildren. The Coronavirus pandemic is making people suffer. I hope all beneficiaries will get their money in time and continue with the lockdown,” he said. 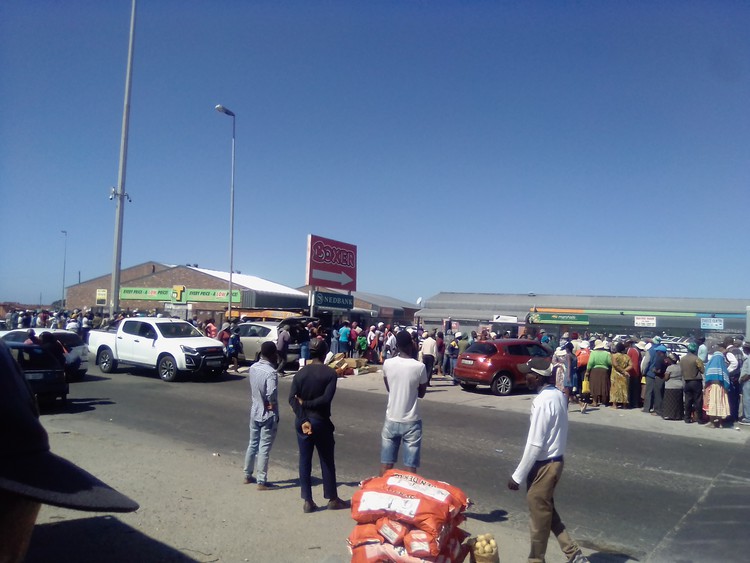 Pensioners were forced to queue among a mass of shoppers outside the Boxer store in Motherwell, Port Elizabeth, on Monday morning. Photo: Joseph Chirume

Previous:  Covid-19: Emergency workers refuse to attend to patient until they get proper equipment

PE’s Day Zero: a result of poor planning and a failure to fix leaks