While South African families in Briardene pick up their lives, immigrants have been excluded from rebuilding efforts 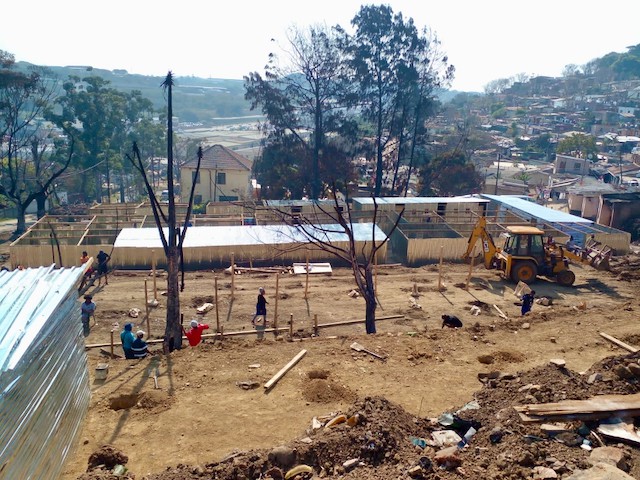 Rebuilding began last week after a devastating fire gutted Briardene informal settlement, north of Durban on 14 July, leaving 280 people homeless. Rubble and debris has been removed and shacks are being rebuilt with state-provided building materials.

Official emergency services were stretched thinly at the time because of the July riots, but various civil groupings and communities came together to help the fire victims.

However, immigrants, who were left homeless by the fire, say they are not being helped in the same way the South Africans are being helped by the government. They were told they would not be receiving building materials without showing a South African ID. The plots where their shacks had stood have been appropriated by others.

Currently, over 20 immigrants, including women and children, are sleeping in a tent. They lost everything in the fire, including passports, documents and permits.

“We don’t have anywhere to go. This is our home,” said Joze Ngoveni, originally from Mozambique. He has been living in Briardene since 2012.

“We are told to leave because we don’t have a right to be here,” said Janeiro Thala, also from Mozambique. He has been in Briardene since 2009.

Thala said they have been living in harmony all this time. After the fire they helped people to rebuild shacks. But suddenly they are outcasts. “We thought we would also be able to rebuild our own homes but now all our hopes are gone. We don’t know what to do,” he said.

Amindo Ngoveni, a Briardene resident since 2010, said they had lived in harmony but now “we are treated like we are not human”.

They were given foam for mattresses and blankets. But “without building material or land to rebuild on, what are we supposed to do?” asked Ernesto Fernando, who has been living at the settlement since 2013.

He said they don’t have money to buy new materials. Some lost their jobs in the July unrest. No space has been left for them to put their shacks.

“After the fire, we used to eat together,” said Fernando. “But since people have moved back into their shacks, they eat on their own and we are left out.”

“It is not fair that we have to be discriminated against because we are not South Africans,” said Fernando.

A resident who did not want to be named said a list of fire victim names was sent to the City of eThekwini after the fire and officials came to the settlement to explain that immigrants would not get building materials. Now, he said, some people were taking the immigrants’ plots. “What is happening now is not fair,” he said. “We should be helping and supporting one another, not be divided like this.”

Grant Coka, chairperson of the ANC in the area, said officials had said they could not give building materials to immigrants because “when they get audited they have to provide proof of how the money was spent … and who it was given to.”

“Rebuilding is underway. We are still waiting for more building material. Some foreign nationals are now renting, while those who cannot afford it are still living in a tent. We don’t know what is going to happen to them,” said Coka.

Shack dweller movement Abahlali BaseMjondolo has blamed the ANC for the situation. In a statement on 24 July the movement said: “Briardene has long-established residents from countries like Mozambique and Malawi, and our movement there, as everywhere, welcomes members without regard for the country in which they were born. A person born in Mozambique has served as the chairperson there.

“When the ANC says that people who it does not consider to be South African are not entitled to support after a disaster it is not only being inhuman, it is also actively and deliberately creating divisions between residents.”

EThekwini Municipality spokesperson Msawakhe Mayisela said fire disaster victims are screened against the existing informal settlement database as well as the fire disaster incident report from disaster management. Application for assistance is approved by the KZN Department of Human Settlements for a once-off subsidy of material worth R8,000 per household. It provides corrugated iron sheets, treated poles, pine doors and windows.

“The beneficiaries are South African citizens as ID numbers are required … in the application process [above]. In most cases, foreign nationals would be renting [shacks] from South Africans,” said Mayisela.

“However, in terms of short-term relief, Disaster Management issues material to everyone affected as they have lost their possessions and are displaced.
They are eligible if they constitute a household. In such cases, their passport numbers are recorded.” 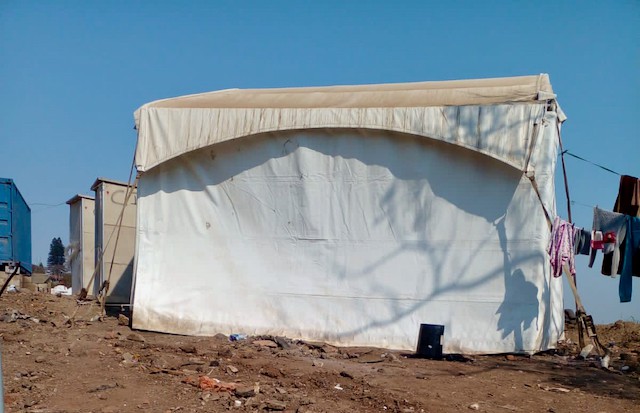 Immigrants affected by the fire are still living in this tent. They say they have not been given building material because they are not South Africans.

Next:  CCMA upholds dismissal of Spar workers in Gqeberha for violating picket rules