When will the taxi violence end, asks Cape Town commuter desperate to get to work

The government must step in and stop the strike, otherwise we will lose our jobs, says store cashier 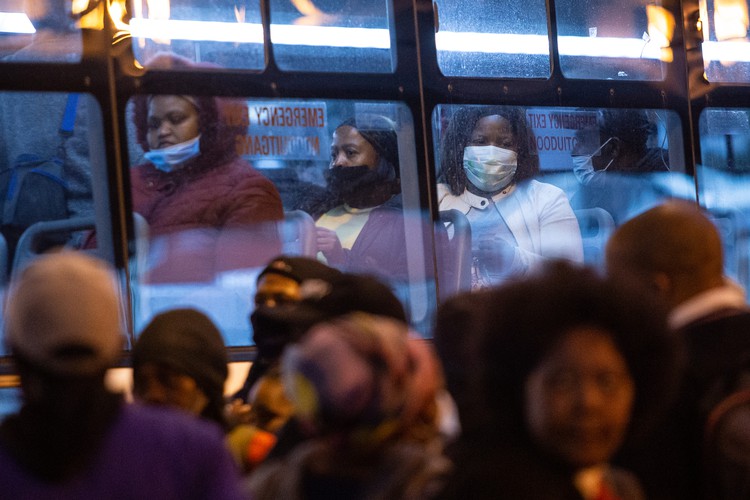 Commuters wait for a bus around 6:30pm on Tuesday at the Cape Town bus terminus. On Monday, many commuters had been left stranded. All photos: Ashraf Hendricks

Unabating taxi violence in Cape Town has forced many workers to stay home and miss work for yet another day. Commuters, bus and taxi drivers all fear for their lives as the conflict between the Cape Amalgamated Taxi Association (CATA) and Congress for Democratic Taxi Associations (CODETA) fails to resolve itself. The violence is affecting the whole community and the economy.

On Tuesday, the Western Cape Provincial Government proposed measures to curtail the violence. Premier of the Western Cape, Alan Winde says that SAPS and law enforcement vehicles had been deployed to escort citizens. In a statement, Winde also proposed that the army be deployed to assist commuters.

Since the start of the year, at least 82 people have been murdered in Western Cape taxi violence. Buses, informal car taxis and e-hailing services have all been affected.

Noluvuyo Ntwanambi, who works as a cashier at Country Fair in Epping and commutes from Tsunami informal settlement, did not dare to leave Delft on Tuesday. “I fear for my life,” she said. She is hoping to club together with other stranded residents and pay a car owner to drive them.

She has now missed eight days because of the violence. She is bracing herself for a greatly diminished salary. It is usually R5,300, but she expects only R3,800 this month. On this, Ntwanambi has to support two children, two siblings and her mother.

“The government must step in and stop the strike, otherwise we will lose our jobs, which are difficult to find these days,” said Ntwanambi.

Thando Xelegu, who works as a laminator at Robertson & Caine in Montague Gardens, also stayed home on Tuesday. “We work as a team, so now my absence from work will affect my colleagues’ performance,” he said.

On Monday, he battled to get transport back to his home in Delft. “The taxi rank was swarming with stranded residents, but there were no taxis and buses in sight,” said Xelegu.

Mzwethemba Ngxangani, a construction worker, hasn’t been able to get to work since Saturday. “I normally use a taxi to travel to work, but … I don’t want to die,” he said. 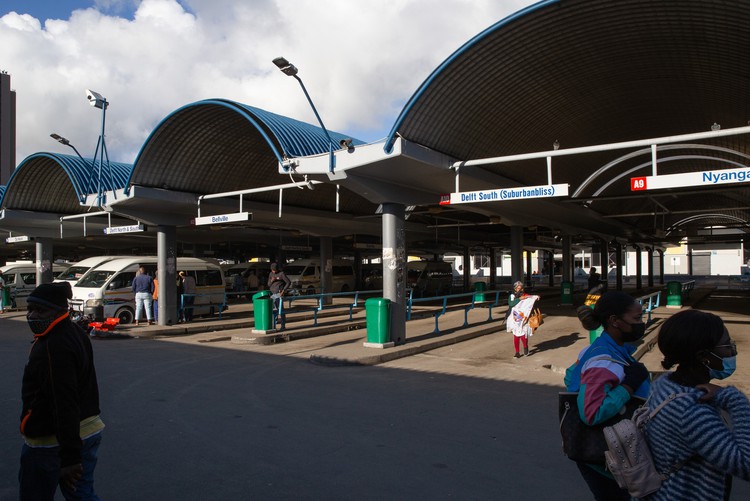 Melisa Tyembile, a cashier at Luzukile Market near Delft, commutes from her home in New Cross Road. She managed to get to work on Tuesday.

“The car owner who used to transport us to work has stopped doing so because he fears for his life. My friend arranged for her friend to take us to work today,” said Tyembile.

“My colleagues walked to Gugulethu last night because they could not find someone to take them home.”

Luzukile Market is located next to a taxi rank. The owner shut up shop for two day last week because of the violence.

“We won’t be paid for the days we have been absent from work. When will this strike end?” asked Tyembile. “I’m a bread winner and single parent with two kids. What will my kids eat, where will I get money to pay rent when I don’t work?” 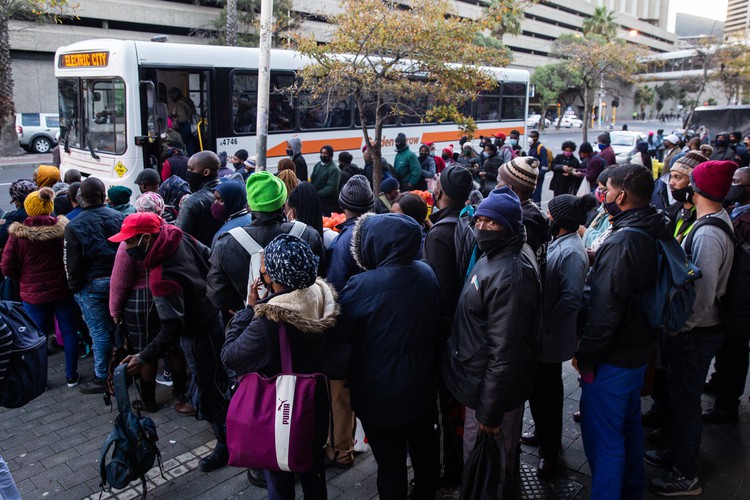 Commuters waiting for a bus in central Cape Town on Tuesday

The absence of taxis has meant long queues where bus services are still running.

Janine Stevens was waiting for a bus on Tuesday with about 60 people on the side walk next to the Cape Town train station. She was trying to get home to Bishop Lavis. Alongside her, City Law Enforcement officers were stopping people from shoving and keeping them in lines.

Stevens was at the bus stop at 5:25am on Tuesday morning and only got a bus at 6:10am. Now, she was once again waiting for a bus, unsure what time she’d get home. 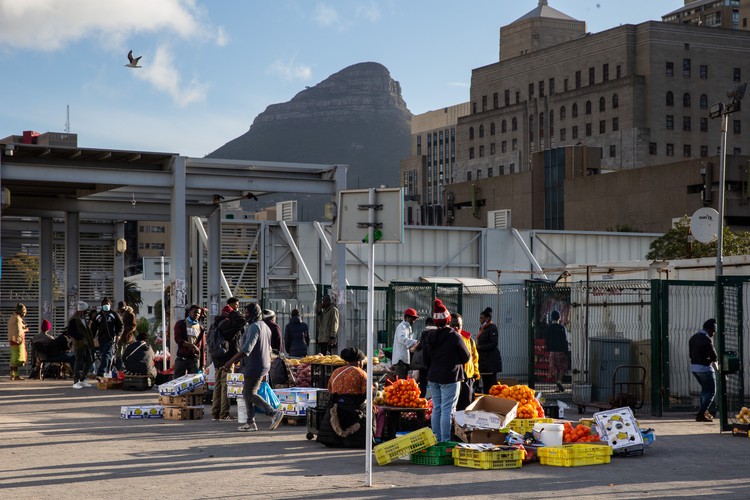 On a normal day, the Cape Town Station Deck would be busy with commuters, vendors and taxis. But on Tuesday at what should be peak hour, only small groups of commuters made their way across the rooftop platform.

Honest Bronclear sells cigarettes and sweets next to the taxi terminus. “There are no customers,” he said. He said he only made about R150 on Monday.

He has had to use an e-hailing service to travel from Delft. It costs R200. To save money, he shares the vehicle with others. If the taxi violence continues, he said he is not sure how he is going to pay his rent. 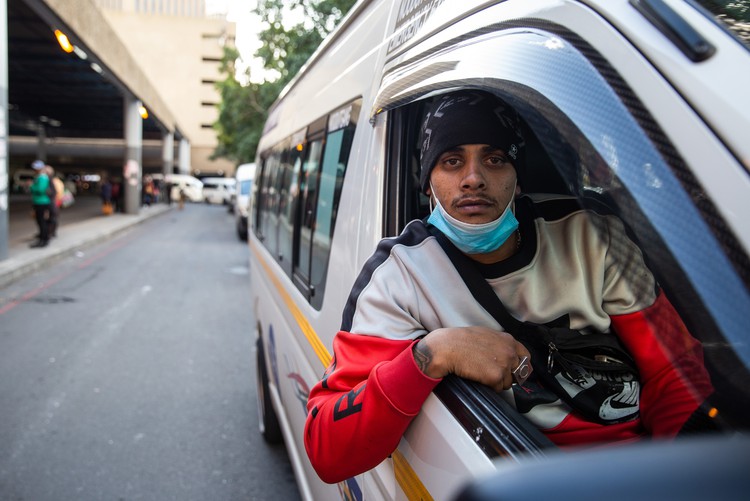 “Our lives are getting threatened by the CATA and CODETA taxi associations,” said Robin Davies, a taxi driver on the Hanover Park route.

“Our lives are getting threatened by the CATA and CODETA taxi associations,” said Robin Davies, a taxi driver on the Hanover Park route.

He said he had received threatening messages on Whatsapp groups saying “every passenger and every driver will be shot in the vans”.

“Everybody’s lives are threatened by this, [on] any means of transportation,” he said.

Davies gets paid according to how many passengers he transports, so the conflict is affecting his income. He is only doing half his usual rounds.

“I just wish the taxi associations could come to an agreement and let everything move forward,” he said.

Previous:  Learners must get meals during Covid-19 pandemic, court orders